TORONTO, ON, Sept. 5, 2014 /CNW/ – Across The Board released “Toronto Listen Up!” today, a new rock music video celebrating life in Toronto just in time to kick off the Toronto International Film Festival. 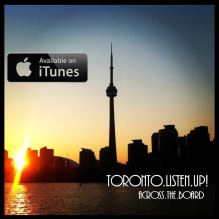 Across The Board (ATB) released a new rock music video today– “Toronto Listen Up!’ –which celebrates the energy and vibrancy of this iconic Canadian city as it prepares for the Toronto International Film Festival.  The Toronto-based Indie-Rock group and creators of “Pick Up and Play” – a weekly live music YouTube web series –filmed the video in August of 2014 at various locations throughout Toronto including Centre Island, the CN Tower, Theatre District and the downtown core. “Toronto Listen Up!” portrays a small town girl’s dream to “make it” in the big city and features lead vocalist, Jacqueline Auguste, and the seamless guitar riffs of her younger brother, Thomas Smith. “Toronto Listen Up!” takes us through the streets of Toronto, to the Rogers Centre and CN tower, down to Buskerfest, and out into Toronto Harbour for a captivating panoramic skyline view of Toronto.

“We want to show the excitement and anticipation of the small town dream”, says Jacqueline Auguste, writer and co-creator of Across The Board –a collaborative Indie Rock/Country music project based in Toronto, Canada. Auguste, born in Camrose, Alberta, came to Toronto in 2002 to complete her medical education and fell in love with the city. “I can’t imagine any other place on the planet with such a strong commitment to film, music and art”, says Auguste, an orthopaedic surgeon by day and avid supporter of independent art projects in Toronto. “If you can make it here—you can make it anywhere!”.

Across The Board is a Toronto-based collaborative music project, independent production group, and creator of the weekly YouTube music video web series “Pick Up and Play”. ATB originals and covers can be found crossing the genres of indie rock, country and folk–landing squarely in the middle with this Ode to T Dot!

The song, Toronto Listen Up!, is available on iTunes, Amazon, and Google Play with a

Copyright Across The Board Music Canada, 2014

Across The Board Music

Across The Board Music